After Sundays dismal days fishing , i was eager to get back on the bank and among the fish . With the S canal at Cunneries fishery in Eccleston hosting my last match of the Autumn–winter league and as it is also full of f1s which i like fishing for in winter  that’s where i decided to go . I managed to get a dinner time finish at work so after hurriedly packing the car and grabbing some lunch , i headed of on my thirty minute journey to the fishery .

I finally got there at around twelve thirty after getting stuck behind a learner driver for most of the trip !!!  there was a well attended match taking place on the old canal and surprisingly their was also a few fishing on both legs of the S canal because our match was to take place on the left hand side , that is where i headed and settled on peg 16 not far from where i fished on my club match in the summer so it will be interesting to see how it fishes in this colder weather .

When i got to my peg i had a quick look around to see what areas the other anglers were fishing and catching on  because it was a short session maybe only three hours , i wanted to make the most of it and gain as much information as possible and i noticed that those on my canal were fishing tight across using pellets , one was big potting and the other kinder potting so it will be interesting to compare their results at the end of the session . On the other canal they seemed to be fishing in the deeper channel but not catching a great deal after speaking to one of the anglers he said it started ok but had tailed off recently  .

I settled on a 4 ft deep rig which after plumbing up a found it at nine meters on the far shelf and also my top kit , I decided to fish my far line first and only planned on using maggots because looking at recent match results that’s what seemed to be working best on here at the moment .

I used a 4×12 malmams winter wire float with a 0.12 garbo main attached to a 0.10 garbo hook length and a small size 20 gamma black hook . Bait today was half pint of maggot and some 4 mm expanders , soaked micros with a touch of f1 flavouring .

I half filled my medium kinder pot with maggots being careful not to over feed because although it was a quite mild winters day the water was still freezing , after lifting-dropping my rig for a few minutes my float twitched and a gentle lift resulted in my first fish of the day . Which turned out to be an 8 ounce f1 and a further dozen followed some touching the 3 lb mark and was putting up a spirited fight on my orange matrix elastic . 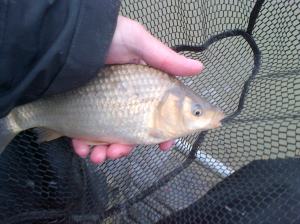 I tried upping the feed to a full medium kinder pot of maggots which got me more bites from a bigger stamp of fish but it also surprisingly brought them up in the water and i began foul hooking the fish , a change of shotting pattern to allow for a slower fall of the bait resulted in an increase in my catch rate although i did deep hook a few and after two hours i had around forty f1s .

I would get spells of catching only gudgeon and in one of these i decided to try my top kit swim but this time with pellets , i hadn’t been preparing this line so i expected it to be a bit slow to start with and after ten minutes my first sign resulted in a gudgeon then another and another , i was just about to give it up as a bad job when i hooked some thing a bit more power full and i landed a f1 and finally they had found the bait . I had around ten fish in an hour but they was coming a lot faster on my nine meter line even after taking into account how long it took to play the fish , so i reverted back to that swim and after having to build it back up because i had neglected it for an hour  the f1s came back in numbers .

It started going dark and cold i was also beginning to run out of maggots and with the remaining hand full i had left , i decided to go back on my top kit line again . This worked really well and was definatley better than using pellets , at 430 i called it a day with sixty fish all f1s between 8 oz and 3 lb for around 40 lb not bad in winter and it compared remarkably well to what i caught during the club match in summer .

As you all know it fishes a lot harder come match day when every peg will be in but at least it gave me an idea of what to expect and to catch a few fish , it might be a good plan to bring two nets with me on the match for when a draw a wind ward corner peg with the f1s balled up in it because im sure you could manage over 60lb even in winter on here .

I’m off to Partridge lakes again on Sunday to fish the open , so lets see how i get on this week !!!

keep coming back to see if i can get my section again . 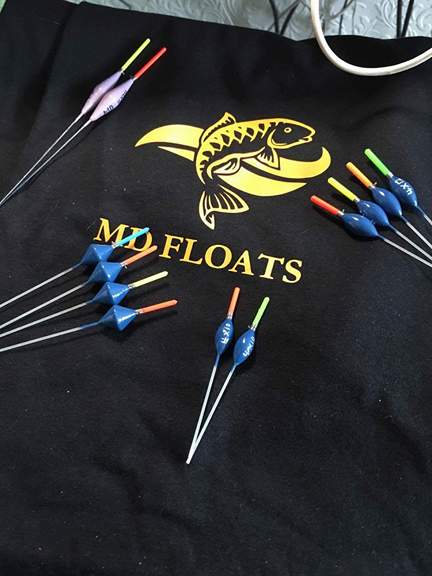